Masale for Daily Use

Masale for Daily Use 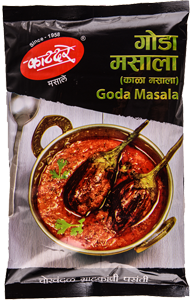 Goda masala is a traditional, aromatic spice blend that is the signature of Maharashtrian cuisine. Various spices, individually roasted and then blended to a perfect consistency can be added to different dishes, giving them a punch of flavor.

Katdare Goda masala saves you the hassle of roasting and blending spices to make gravies or stuffed veggies. Just add this aromatic spice blend to your recipes and enjoy a sweet and spicy taste. This masala definitely adds a delicious flavor to daal, aamti, bharli vaangi, vaangi bhaat, masala bhaat, missal, usal, and many other Marathi specialties.

Katdare goda masala is available in 500gm, 200gm, 100gm or 50gm packs. The Goda masala price for each pack is Rs.200, Rs.82, Rs.42 and Rs.22 respectively. The shelf life of this spice blend is six months. You can comfortably store it in an air tight jar after opening. Refrigeration is optional.

Maharashtrian goda masala is a spice blend that is largely used in recipes where a certain stuffing is made.

• What is goda masala in English?

There is no exact equivalent name for Goda masala in English as the spices and ingredients that go into making this blend are Indian and less used in continental cuisines. But as ‘Goda’ literally translates to ‘sweet’, this can be called a sweet spice blend. Although the taste it gives is not just sweet but a mix of different flavors.

• What is goda masala made of?

• How to use goda masala?

Add goda masala to stuffing made for vegetables or in gravies and daals for a sweet, sour, and spicy mix of flavors.

No. There are certain ingredients that are different between the two masalas. Also, the spices used in Kala masala are roasted for slightly longer as compared to those roasted for making Goda masala.

No. Katdare Goda masala contains no onion or garlic.

• What is the difference between goda masala and garam masala?

Goda masala is quintessentially a spice blend used in Marathi cuisine while garam masala is used more in north Indian cuisine. A few ingredients in the two masalas differ as well.

• Where will I get good goda masala?

Get the best quality, fresh and hygienic Goda Masala in various quantities at our website.

What Recipes Can Be Made with Goda Masala?

Stuffed brinjal, masala bhaat (Maharashtrian spiced rice), vegetables, daal, and many other dishes can be made with Goda masala. Some recipes call for jaggery in combination with goda masala.

Other products from this category